Since joining Stay Frosty, my security status has been going down. I am not a very succesful pirate, so the decline is slow, but it is there. Killing pods is much worse than killing ships - I seem to loose 0.75% for aggressing a ship, and almost 10% for agressing a pod. I have a couple of levels of fast talk, so the numbers may have changed a bit but the basic relation should be the same.

There are already systems in high sec where the faction navies have taken a dislike - I can’t dawdle in 1.0 and 0.9 systems anymore. Which made me doubt my decision to kill all the pods, and last weekend I tried some belt ratting to limit the damage to my sec status. 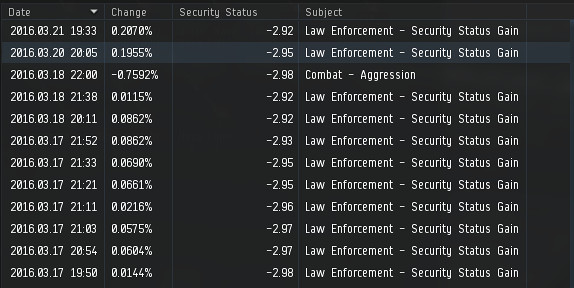 I’ve done this before in EVE University, but those were Serpentis rats. Around Ishomilken, it’s Guristas. They use missiles, and they web you. I tried using a Trasher against a clone soldier. RIP Thrasher.

So I came up with a brilliant plan to use a RLM Bellicose. It’s the only cruiser and weapon system where I have good skills. And it worked, kind of. I almost killed my first clone soldier, except I forgot to launch my drones for the first RLM cycle. I got him into structure, then ran out of missiles. I did not find another spawn, but I think I could have killed him in 2 cycles if I had launched the drones at the start.

Probably better to use a Vexor like everybody else. But … I am not having fun, and I doubt I would have fun in a Vexor.

So I did some reading. I even made a chart with tokens needed and their values, but then I found this by Steve Ronuken: Tags for Sec

Anyway, 340M ISK to completely repair my security status. Hell yeah, sign me up! I should have done my reading before wasting my weekend on rats. And my safety is going red again, because I AM GOING TO POD ALL THE THINGS!

PS: I am glad I voted for Steve Ronuken
PPS: If you have not voted yet, please vote for Steven Ronuken. And Joffy. No order implied
PPPS: If, on my travels, I would encounter Steve Ronuken, I would totally pod him.
PPPPS: I would not pod Joffy, because Joffy is much better than me at PVP.